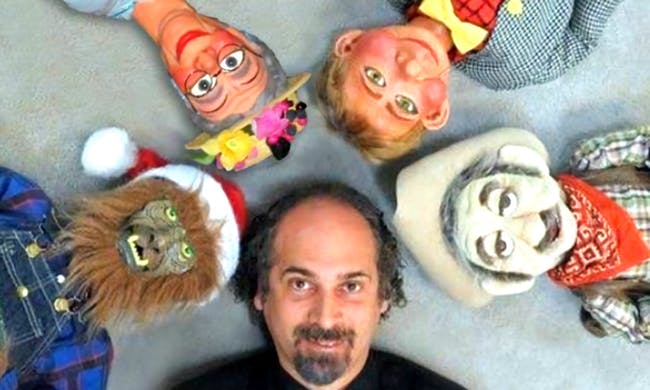 Vaudeville puppet act that keeps the art alive and well! So sit back, relax and bring your funny bone to the show cause you're going to need it!

What to expect: a whole lot of puppets, like dancing skeletons, singing cowpoke, and Frankenstein’s head in a box, not to mention plenty of magic tricks and audience participation!

My name is Bob Abdou, stage name Mr. Puppet. I have been a full time entertainer since 1996.

I got my start in Atlanta, where I got my stage name "Mr. Puppet". As a new ventriloquist, I was very privileged to have many professional ventriloquists and puppeteers as friends and mentors early in my career.

I owe a debt of gratitude to folks who nurtured me. To those schools and families that hired me when I was just starting out, I say, "Thank you."

In Atlanta after my career took off, I became a regular at schools and birthday parties and made many special relationships there.

In 2002, I married my best friend, June Wilkins and moved to Philadelphia, Pennsylvania where June was still in seminary. Work in Philadelphia was just as successful as Atlanta for me and living on the East Coast made me an even bigger Mets fan!

June graduated and got called to a church in Austin, Texas and we moved there in 2003. Living in Austin has been fun and hot! Texas has given me an opportunity to bring great puppetry to the Lone Star State (did I mention how hot it is here?? - It's HOT!) My goal in Texas is to prove that puppets and ventriloquism can be entertainment for all ages - not just the little kiddies.

After 8 wonderful years in Texas and making puppetry a success, June and I have moved to Columbus, Ohio. We are now in our new location and want to continue bringing laughter and fun with puppets to the Buckeye State.

My wonderful career has allowed me to meet wonderful people and has taken me to some of the most beautiful places on earth. I've performed in many different states including Hawaii and Tokyo, Japan at the Japanese Ventriloquist Convention in 2006.